A response to a response to a response. My Flower is a musical reinterpretation by Damon & Naomi of a song by Kazuki Tomokawa, Watashi No Hana, itself based on a poem written by Japanese teenage serial-killer-turned-poet Norio Nagayama. In the poem, the poet asks "If I were a flower, what kind would I be?"

Nagayama was sentenced to death for his crimes, sparking debate about capital punishment in modern-day Japan. This installation took place during the onset of the American-led war in Iraq, my additional layer to this already provocative piece. Plexiglass, cardboard, wire, laser prints & mass produced garden tools. 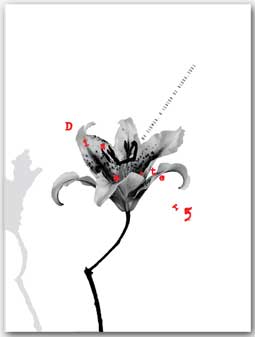